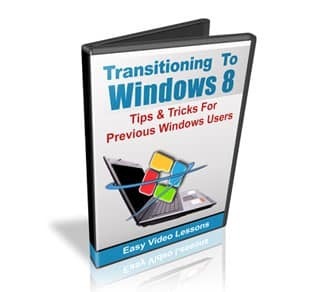 Learn how you can keep your familiar desktop multitasking environment while transitioning to windows 8 with our 5 part video tutorial series.

Are you using windows XP or any version of windows prior to windows 8? Do you need to upgrade or get a new computer? if so you are in for a big change. or are you?

Learn how you can easily make the transition to windows 8 and keep your familiar desktop multitasking environment while taking advantage of the great features in windows 8!

Most of us are familiar with the way Windows works on a computer. Or at least we were prior to the release of Windows 8. Windows 8 has been described as having a “dual personality”, and for good reason.

When Windows 8 first came out the world was shocked that their familiar “start button” had been removed. Furthermore the whole interface was different. When you opened apps (which we used to call programs) you were either greeted with a full screen display with no way to open additional full windows, or suddenly jarred into the “desktop mode”. Honestly the first attempt at Windows 8 was (in my opinion) a freaking disaster.

Microsoft was forcing their will on the world with their “one operating system for everything” philosophy, when clearly the mobile world and desktop / laptop computer world have some major differences and need to be treated differently.

Now we have a big improvement. The start button is back (but it isn’t what you think), you can multi window in Windows 8 Metro (sort of) and the desktop gets some recognition. Plus the performance upgrades are substantial. But there is still a long way to go to give the desktop user the things that they need.

And that is where this video series comes in. Many of us like the way things worked before, and productivity is key for people trying to get their work done. We need true multitasking and to be able to have as many windows open as we require.

This video series is going to show you everything you need to know about transitioning to Windows 8.

PS. Get your copy of the video series now before the price goes up.